Guide to Spanking by Alix Fox for Bizarre Mag

Whether you want to spank or be spanked, in public or private, you need Bizarre’s guide to whacking. 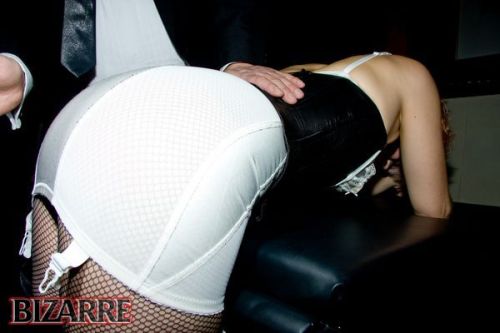 How to spank someone safely and effectively

• This might sound about as sexy as a hanging basket full of haemmoroids, but if you don’t want your S&M session to end up in A&E, it’s essential that you first establish whether the person you’re spanking has any health issues you need to be aware of – asthma? Old sports injuries?
• Establish a safe signal – one traditional method is to use the word ‘red’ to mean ‘stop that immediately’ and ‘amber’ to signify that your sub is approaching the limits of what they enjoy and want you to slow down or ease off. In a noisy club, however, safe words can be hard to hear (never mind if you’re using a gag…). A fantastic trick I learned at Subversion was to lift my right foot up – just a little if things were getting hairy, and all the way if they were at werewolf levels and I wanted to call a halt to proceedings. It was subtle enough not to break the mood, and because I was kneeling on a bench being spanked from behind, my master could always see my signal.
• The formidable Mistress Absolute showed me that these essential conversations, although they seem dry, can actually be used to start building an atmosphere between you and your sub. Put your hand on the back of their head, run your nails through their hair, pressing a little on their skull to assert your dominance, and speak close to their ear in firm tones.
• Give your sub’s ass a few massaging squeezes and pats to get blood flowing to the area before you begin spanking proper. It’s a good idea to start just with your hand, as it gives you maximum control and instant feedback. Warming up like this also allows your sub’s head to get used to the reality (as opposed to the fantasy) of being beaten.
• Cup your hand a tad and spank upwards onto the fleshy middle of the buttock; avoid the outer sides as this is where the sciatic nerve is located, and you could damage it. If you get a good, clean smacking sound, that’s a decent indicator that you’ve got a good, clean aim!
• Ask your sub to rate from 1-10 how painful they found your blow,1 being ‘I’ve endured more challenging farts’ and 10 corresponding to ‘Are my legs still attached? Because I think you just hacked into my ass with an axe.” Ascertain whether they’re someone who likes pain and wants to be pushed to their limits, or whether they prefer to be more mildly stimulated and like to feel a variety of low-to-mid-level sensations – I’m certainly the latter.
• Keep asking your sub to rate blows at regular intervals, as they may find the same force more painful if they’ve become tired or sore.
• Alternate your rhythm, strength, and which buttock you’re smacking. Try removing your hand straight after a blow, or letting it rest on your sub’s skin. Lightly squeezing with your palm after a series of slaps will help ease the pain in your subject’s rosy rear.
• Allow plenty of small breaks in between spanking torrents, and don’t neglect the rest of the body; run your hands and nails over the back and thighs, and walk around your sub to allow them to glimpse their master.
• It’s safe to spank the front on the thigh, the upper arm, and the back of the shoulders. Some women also enjoy light strokes to the breasts. Avoid the spinal column, and NEVER hit the neck or kidneys, around the central sides of the back.
• Especially if they’re a beginner, keep returning to your sub’s ear to tell them what you’re going to do next and advise them of when you’re going to change instruments. You’re telling, not asking, so you remain dominant, but it gives them a chance to say no to something if they need to. They can always say if they’d prefer you to spring things on them!
• Just because you’re being dominant doesn’t mean you have to be a bitch! So long as you give off an air of confidence and control, it’s not necessary for you to be cruel, either physically or verbally.
• Observe the work of other dom(me)s; if you’re polite and ask without interrupting a scene, a house dom(me) might even be willing to instruct you. It should be self-explanatory how to use most furniture – perhaps with the exception of hoists – but if in doubt, ask.
• Check out Mistress Absolute’s DVD, ‘Beginner’s Guide To BDSM’, available from Mistressabsolute.com.

• If you’re new to BDSM or haven’t played with a particular dom(me) before, avoid using restraints so you can get up and walk away if you feel the need.
• Take up a position that allows you to brace yourself against blows so you don’t fall forwards too much – you don’t want someone to whack your ass and knock out your teeth.
• Fetish clubs don’t provide equipment like canes, so people bring their own. If you’re being publicly flogged for the first time and want to move beyond a hand spank, it might be safest to insist that your master use only tools you’ve provided so that you don’t get any nasty surprises. That said, it’s exciting to experiment with new sensations, plus dom(me)s often prefer to use their own equipment because they know how it handles.
• The master who ‘broke me in’ at Subversion had a golf caddy full of goodies, ranging from wooden and metal rulers to light-up drumsticks. After spanking me, he was careful to introduce only ‘soft’ toys first – a wide, cushioned beater, a silky suede flogger – before working up to a cane and a riding crop. He announced each instrument before he used it, as well as describing what kind of pain I could expect to feel (stinging, sharp, dull, gentle), and how many strokes he was about to give me. This really worked for me; his professional tone was reassuring, but also enhanced the ‘mature teacher/youthful pupil’ role play I felt we had going on. I’d recommend first timers ask their dom(me) to do the same.
• There’s no set time on how long a scene should last, apart from making sure you’re not hogging the furniture all night! Remember BDSM isn’t an endurance test unless you want it to be. Take it slow to begin with though – it’s a good idea to stop earlier than you think you need to and allow yourself time to muse upon how your body and mind feel. You can always embark upon another session if you’re not satiated.
• Get up slowly after a spanking; you might be dizzy, both from holding your head in a single position for a while and as a result of the endorphins your brain releases in response to pain. Because of these endorphins, an S&M session can make you feel sharp and alert, yet simultaneously oddly sleepy, floaty and ‘zenned out’ – a sensation fetishists refer to as being in a ‘subspace’. It’s a feeling some people find addictive, seeking increasingly higher levels of pain in order to get their ‘high’. For a newbie, though, it can feel pretty weird. I was psychologically reeling after my first few public spankings; I needed to go and have a drink and a chat in the chill out room to come back down to earth.
THE MORNING AFTER
Repairing and reflecting

Would you like to see more content like this? Please go to Bizarre and sign up for free! There you will find a plethora of goodies that will satisfy you to your alternative heart’s desire.