As I promised, here is my grandma Anna’s statement in her own words. It was written and presented to the German Government about 10 years ago:

I, Anna Glegola, born Kryska, was forcible deported to Germany on May 23, 1942, together with my family, for forced labor in the III Reich. 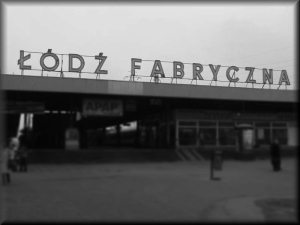 During the trip to Germany, in the train, at Lodz Station, Poland, the Germans killed my father. A few minutes before the train left the station, my father on the verge of a nervous breakdown because his his wife and child were hungry and all were being taken to Germany, cracked open a window and yelled to the heavily armed German military police who was standing on the platform: “I will die, but Hitler will lose the war!” The indignant German gave a shrill wistle and all at once many armed Germans came rushing up with weapons drawn. They jumped into the train compartment where our mother, father, myself, my brother and my sister, together with other deportees were crowded like animals. The Germans struck my father several times withthe rifle butt. Blood gushed everywhere, including on all of us in the compartment. My father, bloody and battered, jumped out the window and tried to hide somewhere under the train, but the Germans fired several rounds and he was killed on the spot. I will never forget the bloody dress I wore, stained with the blood of my father. The German soldier was so heartless that he took off one of my father’s shoes, put it on th etop of his bayonet and dropped it into the compartment through the window. He said to my mother: “keep this shoe as a souvenir”. A few minutes later, a small army vehicle came up and they tossed my father, like a dog, into it. The car drove off, no one knows where. My father was probably buried somewhere in the fields. No one knows what the Germans did with my father’s body. After that event, the Germans thoroughly checked everything and the train continued to Germany.

We traveled to the north of Germany, to a city called Greiswalk-Rapenhagen, or something like that. Here the Germans segregated us into three sections: mothers with children, men and single women. Five people were assigned to each tiny room. Because my father was no longer with us, my mother, I, my brother and sister, made up only four, they added and 18 yearl old girl to our room. As I mentioned, the room was very small, there was only room enough for two plank beds on which all of us slept. Dark shades covered the tiny window, and during the night rats and mice ran all over us so that it was difficult to sleep. I remember that my mother secretly smuggled in a small flashlight and when the rats and mice began running in the room, she shone the light so that nothing would happen to us. We did not realize that in the black shades of the tiny windows were two small holes. The Germans noticed that some light was shining, came to the room and beat my mother until she was unconscious. They said that she had some secret information and she was trying to send messages by flashing the light. Every morning, as soon as it was light, my mother had to go to work with other women. She came back late in the evening.

My brother, sister and I, together with other children, were taken by truck to a farmer’s fields and were told to gather stones. Once a day we were given some soup in which floated all the scraps of old vegetables like cabbage, beets, carrots and very seldom, you could locate a potato. With this, we were given a slice of dark, rye bread. All of us had to wear the letter P for Pole, pinned to our clothing. When the weather was good, it was not so bad, but when it rained, it was very hard to walk in the fields. Our clothing was wet, the soil clung to our torn shoes. The German woman who was guarding us had a raincoat and rubber boots. She often said to us: “work, you Polish swine!” and waved her staff like a rabid witch. Mercifully, we as children did not have to work on Sundays. It was then that I and my brother and sister went walking around the barracks to try finding or stealing something to eat. We were in Germany until 1945. Someone would think that it was not that long, but I will never forget that armed German with the bayonet who tossed my father’s shoe into the train compartment where we were with my mother and said: “Keep this as a souvenir”. The other unforgettable thing is that German woman who guarded us when we were picking up stones. We called her witch, but often she was worse than a witch. Even though I am now 65 years old, I will never forget the things I suffered as a child in Germany. If it had not been for the Germans and deportation, I would have attended school together with my brother and sister in Poland. I would not have had to suffer the tragedy of witnessing my father’s death as a child and being forced to work picking up stones in the field. 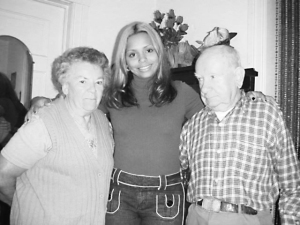 Grandma Anna, Me and Edward

My grandmother would receive a mere $3,000 for her pain and suffering. Her husband Edward Glegola, who was forced to serve in the German army, would receive a stipend of $1,500 from the German government. I do not remember if this was a monthly or yearly stipend, but I do remember the many times that Edward would cry when reliving his time spent serving in the German army. He actually lost his sight in one eye from being hit in the eye with the butt of a rifle. Edward died in January of 2008. My grandmother continues to live in Hamtramck alone. I am sad for her…. I am always sad…

Peace be with you until the next time…..

3 responses to “Mój babunia (My Grandmother)”